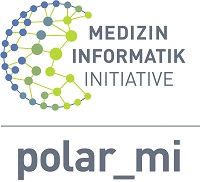 The JULIE Lab is member of the POLAR_MI (POLypharmacy, Drug interActions, Risks) as a part of the Medical Informatics Initiative Germany, founded by German Federal Ministry of Education and Research (BMBF). POLAR aims to contribute to the detection of health risks in patients with polymedication using methods and started in March 2020. For the details of the project please visit the POLAR website.

The JULIE Lab is member of the SMITH consortia (Smart Medical Information Technology for Healthcare) as a part of the Medical Informatics Initiative Germany, founded by German Federal Ministry of Education and Research (BMBF). The project started in January 2018. For the details of the project please visit the SMITH website.

The JULIE Lab is member of the AquaDiva project INFRA1. For the details of the project please visit the AquaDiva INFRA1 website.

The European Commision is funding project for Multilingual Annotation of Named Entities and Terminology Resources Acquisition under the EU's Seventh Framework Programme for Research from July 2012 to June 2014. The MANTRA project is a research endeavour of researchers from several academic institutions across Europe.

For the details of the project please visit the MANTRA website.

The German Ministry of Education and Research is funding the new Jena Centre of Systems Biology of Ageing from October 2009 to September 2014. JenAge is a research endeavour of researchers from several academic institutions in the city of Jena.

JULIE Lab's contributions to the project:

Automatic text mining will be used to cope with the ever-increasing flood of age-related scientific documents in a systematic way and to generate plausible hypotheses on ageing and age-related diseases through text analytics. This textual information will be used, together with data from other databases and from the JenAge Centre, to set up a new public database on molecular, cellular and organismic aspects of ageing.

Link to the press release (in German)

For details of the project please visit the JenAge website

The JULIE Lab was one of the academic collaborators in the CALBC project. CALBC (Collaborative Annotation of a Large Biomedical Corpus) was a European support action funded in the EC's 7th Framework Programme. Its focus was the automatic generation of a very large, community-wide shared text corpus annotated fully automatically with biomedical entities. We proposed to create a broadly scoped and diversely annotated corpus (150,000 immunology-related abstracts from Medilne annotated with approximately a dozen semantic types) by automatically integrating the annotations from different named entity recognition systems.

A specific CALBC challenge run which consisted of building a large, diversely annotated corpus. Participation was open to any team that was willing to submit annotations obtained with their own named entity recognition system(s). The annotations of all participating systems was automatically harmonized with additional metadata to develop a silver standard corpus (no golden data will be supplied. The integrated corpus therefore has a broader scope than any single system available before.

Link to the CALBC project

Overview to the CALBC Challenge and the challenge timeline

The JULIE Lab was the coordinator of BOOTStrep (Bootstrapping Of Ontologies and Terminologies STrategic REsearch Project), which was funded in the EC´s 6th Framework Programme. The project pulled together already existing biological fact databases as well as various terminological repositories and implemented a text analysis system which continuously increases their coverage by analysing biological documents. The project started on April 1, 2006 and ended on March 31, 2009. The overall budget was 3.6 million euro. Six partners from four European countries (Germany, U.K., Italy, France) and one Asian partner from Singapore were involved in the project.

Link to the BOOTStrep project

The JULIE Lab played a central role in the StemNet project, which was funded with about 1.35 Mio Euros by the German Federal Ministry of Education and Research (BMBF). The project goal was to build a knowledge management system for the domain of hematopoietic stem cell biology by integrating comprehensive, but distributed and heterogenous web-based information. By means of text and data mining methods, publications, structured databases and web-based algorithms was to be searched automatically and the information extracted was to be integrated, processed and presented in such a way that the dispersed knowledge can be retrieved by the user in an integrated way.

Link to the StemNet project

Semantic Interoperability and Data Mining in Biomedicine (NoE 507505). Its goal was to establish Europe as the international scientific leader in medical and biomedical informatics. The long-term goal of the network will be the development of generic methods and tools supporting the critical tasks of the field; data mining, knowledge discovery, knowledge representation, abstraction and indexing of information, semantic-based information retrieval in a complex and high-dimensional information space, and knowledge-based adaptive systems for provision of decision support for dissemination of evidence-based medicine.

Link to the Semantic Mining project

Morphosaurus is a unique and powerful medical language tool that the Department of Medical Informatics in Freiburg, Germany, developed in cooperation with the JULIE Lab and the Health Technology Master Program of Parana Catholic University in Curitiba, Brasil. The project was mainly funded by Deutsche Forschungsgemeinschaft (DFG), grant KL 640/5-1 and 5-2.

Link to the Morphosaurus project

Since 2006, the JULIE Lab employs UIMA. For more information about our work in context of UIMA check these links:

The UIMA Tutorial hold at SMBM 2008